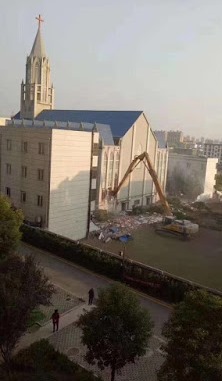 Chinese Christians in Anhui are said to be ‘outraged’ after their state-registered megachurch was demolished and their pastors arrested.

Pastors Geng Yimin and Sun Yongyao were arrested the next day on suspicion of ‘gathering a crowd to disturb social order’. Their church could seat up to 3,000 people.

ChinaAid Director Bob Fu says believers are ‘outraged’. ‘The Chinese Government is now ordering believers to worship in a remote endangered building which can only host a few hundred people,’ he said. Yet, ChinaAid says many Christians, including those in Funan, are too afraid to speak out for fear of more persecution.