I cannot see how this could be ISIS, much more likely fanatical Buddhist extremists in this country. 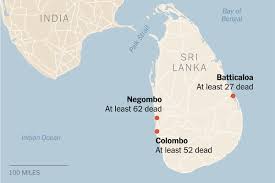 Perpetrators of the Deadly Bombings Remain Unknown
04/21/2019 Washington, D.C. (International Christian Concern) –  International Christian Concern (ICC) has learned that at least 189 people have been killed in a series of bombings targeting churches and hotels across Sri Lanka. According to reports, as many as 400 others have been hospitalized with injuries as a result of the bombings that mark the first major terrorist attack since the country’s civil war came to a close in 2009.
Six bombings took place around the same time at 8:45 a.m. in the morning as Easter services began across the country. The deadliest attack took place at St. Sebastian’s Church, a Catholic church in Negombo, about 20 miles north of the country’s capital city of Colombo. In that attack more than 60 worshipers were killed.
In other attacks on churches, St. Anthony’s Shire, a Catholic shrine in Colombo, and Zion Church, an evangelical church in Batticoloa, were also bombed. In those attacks, at least 52 were killed at St. Anthony’s and another 38 killed at Zion Church.
One of the churches targeted was Zion Evangelical Church in Batticaloa. Barnabas Fund has a close relationship with this congregation of over 400 people and has been helping war widows at the church for several years. Around 35 people were killed at Zion Church, mainly children. Church leaders had spotted a suspicious person in the building before the service and sent someone to question him and get him out of the building. The suicide bomber exited as requested and detonated himself outside, in the grounds of the church, where the children were playing while they waited for the service to begin. Zion Church, whose congregation is mainly poor and needy, has asked Barnabas Fund to assist the bereaved families with funeral costs, and we will be sending these funds tomorrow. Help will also be needed with medical care for the injured at Zion Church and in other parts of Sri Lanka. Please pray for the suffering and grieving Christians in particular those mothers who lost their husbands and now have lost children too.
Three hotels popular with foreign tourists in Colombo were also bombed, including Shangri-La Colombo, Kingsbury Hotel in Colombo and the Cinnamon Grand Colombo. According to various media reports, it remained unclear whether there were any casualties in the hotels.
So far, no one has taken responsibility for the attacks on the churches and hotels. However, Sri Lankan police say the attacks were highly coordinated and early investigations suggest that they were carried out by suicide bombers.
Out of Sri Lanka’s total population of 22 million, Christians only account for 7.6% according to the 2012 census.
Christians in Sri Lanka have claimed to be facing increasing intimidation from Buddhist extremists in recent years. According to the National Christian Evangelical Alliance of Sri Lanka (NCEASL), which represents more than 200 churches and other Christians groups in Sri Lanka, there were 86 verified incidents of persecution in 2018. This included incidents of discrimination, threats, and violence against Christians.
In 2019, NCEASL has already recorded 26 verified incidents of persecution. This includes incidents as recent as a mob attack on a Methodist Prayer Center on Palm Sunday. In that incident, ICC reported that 25 young people pelted Christian worshipers with stones and firecrackers before locking the Christians within the prayer center and refusing to release them.
ICC’s Regional Manager, William Stark, said, “The thoughts and prayers of ICC first and foremost go out to the families of those killed and injured in this deadly wave of attacks. No one should fear being the target of such extreme violence simply because of their identity as a religious minority. Too often Sri Lanka’s authorities have tolerated instances of discrimination and intolerance against Christians and other religious minorities. This must come to an end. Authorities must investigate who was behind these deadly attacks and bring them to justice.”

VOICE OF THE PERSECUTED

(Voice of the Persecuted) It is with a heavy heart to report on Resurrection Sunday that a massacre has taken place targeting Christians who were attending worship services at St. Anthony’s Church in Colombo, St. Sebastian’s Church in Negombo and Zion Church, in Batticaloa in Sri Lanka. At the time of this report, the latest update from police claim that at least 207 were killed and at least 450-500 injured in 8 explosions by suicide bombers at the churches, Shangri-La, Cinnamon Grand and Kingsbury hotels. Viewer Warning: below video content graphic

The majority of casualties are Christians and the death toll and numbers injured are expected to rise. Earlier, the government said they suspected the suicide bombings were carried out by one group. Finance Minister, Mangala Samaraweera said,

The bombings are not the doings of a fanatical individual. It’s obviously a highly coordinated attempt to create murder, mayhem…