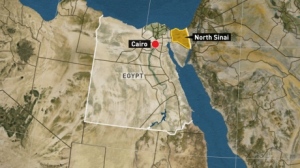 Egyptian Christians Worry that Authorities Are Ignoring Root Causes of Persecution
11/15/2018 Washington, D.C. (International Christian Concern) – International Christian Concern (ICC) has learned that on November 11, the Church of St. George in Cairo experienced a violent intrusion. According to Watani, the intruder was a 22-year-old man who injured two Christians while shouting Islamic slogans. Police responded to the scene and arrested the attacker.

Egyptian authorities claim that the intruder made the violent disturbance because of a mental illness and drug usage. However, local Christians have expressed concern that this claim is an attempt to hide the Islamic extremism that plagues Egypt.

“The media uses words which don’t reveal the truth,” Ehad, a local believer, told ICC. “Now we have discovered that that this was a young man, not an old one. Also, he was holding a Koran and sharp tool [while] injuring some people on their heads. The media’s role is to reveal the reality and not to hide information to make the Copt[ic Christians] calm down.”

Another local Christian, Majeed, added, “It’s too awful. I can’t imagine that we should adapt to these incidents. Lies and lies and lies… I’m sure that this criminal will not be punished.”

“Mentally ill, what?! How the media manipulates us!” exclaimed Hani, another local Christian.

The intruder reportedly entered the Church of St. George through a room intended for baking bread intended for the Lord’s Supper during the service. The intruder hit the baker on the head with an iron rod, while shouting, “Allah is great.” When another Christian attempted to rescue the baker, he was also injured.

The incident occurred just over a week after the deadly attack against Egyptian Christians traveling to St. Samuel Monastery. Egyptian authorities have experienced a renewal of heavy criticism for failing to address the root causes of Islamic extremism and protect Christians from violence.

Claire Evans, ICC’s Regional Manager, said, “Thankfully, no one was seriously injured during the violent intrusion of St. George’s Church, and the police responded quickly. However, we cannot forget the context of the attack. It is not unusual for the Egyptian authorities to claim that something other than Islamic extremism drives the less publicized incidents of persecution. The situation surrounding Egypt’s Christians will not improve unless there is honesty in confronting why these kinds of incidents happen. We must continue to keep Egypt’s Christians in our prayers.”