An Indonesian court has found Jakarta’s Christian governor guilty of blasphemy and sentenced him to two years in prison, in a trial that was widely seen as a test of religious tolerance and pluralism in the world’s largest Muslim-majority country.

Basuki Tjahaja Purnama, better known by his nickname Ahok, was “found to have legitimately and convincingly conducted a criminal act of blasphemy, and because of that we have imposed two years of imprisonment”, the head judge, Dwiarso Budi Santiarto, told the court.

“As part of a religious society, the defendant should be careful to not use words with negative connotations regarding the symbols of religions, including the religion of the defendant himself.” 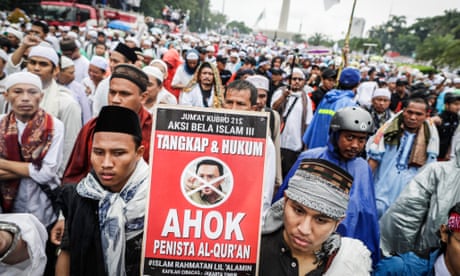 Jakarta governor Ahok’s blasphemy trial: all you need to know

Another judge, Abdul Rosyad, said reasons for the stiff sentence included that “the defendant didn’t feel guilt, the defendant’s act has caused anxiety and hurt Muslims”.

After the verdict, the five-judge panel ordered Ahok’s immediate arrest. Ahok has said he will appeal.

The blasphemy charge related to Ahok’s use of a passage of the Qur’an during campaigning for his re-election in September, which hardline Islamist groups said amounted to insulting the holy book.

He insinuated that his opponents had used a Qur’anic verse to trick people into voting against him. An edited version of his speech went viral online, sparking outrage.

Ahok, a Christian with ethnic Chinese roots, is a double minority. His trial came after large protests against him in the capital that drew hundreds of thousands on to the streets.

On Tuesday, hundreds of members of hardline Islamist groups gathered outside the south Jakarta courtroom amid a heavy security presence, calling for Ahok to be given the maximum penalty.

As news of the sentence emerged members of the crowd shouted “God is greatest”.

The government has been criticised for not doing enough to protect religious minorities, but President Joko Widodo, an ally of Ahok’s, has urged restraint over the trial and called for all sides to respect the legal process.

Thousands of police have been deployed in the capital to prevent clashes between Ahok supporters and opponents. “Both groups will have the opportunity to demonstrate, but we are taking steps to prevent clashes,” said the national police spokesman, Setyo Wasisto.

Ahok lost his bid for re-election in an April run-off to a Muslim rival, Anies Baswedan.
He will hand over to Baswedan in October. The vote was the most divisive and religiously charged in recent years.

Prosecutors had called for a suspended one-year jail sentence for Ahok on charges of hate speech. His opponents believe that is too light. The maximum sentence is five years in prison.

Andreas Harsono, an Indonesia researcher at Human Rights Watch, said the verdict was “a sad day for Indonesia”.

“Ahok’s is the biggest blasphemy case in the history of Indonesia. He is the governor of Indonesia’s largest city, an ally of the president. If he can be sent to jail, what could happen to others?” he said.

Harsono said more than 100 Indonesians have been convicted of blasphemy in the past decade, and acquittals in such cases were extremely rare.

Todung Mulya Lubis, a human rights lawyer who also defended the Bali Nine duo Andrew Chan and Myuran Sukumaran, said it was worrying that one judge cited the leader of a hardline Islamic group known as the Islamic Defender’s Front as an expert in the judgment.

“Rizieq Shihab cannot be considered as an expert because he openly, publicly accused Ahok of blasphemy, so he is not an independent, neutral expert anymore. But the judges mentioned his name in their judgment and I thought this is not correct.”

“The judges also talked about experts from [the Islamic organisation] Majelis Ulama Indonesia. With all respect, I don’t think they can be considered as experts because they had taken sides already, long before the trial.

Lubis said the verdict set a “bad precedent”, adding: “Religion is a private matter … so when you put it in the criminal code it can be used by people to discredit and suppress others. This is the problem with the blasphemy law. This is a very sad moment for us.”